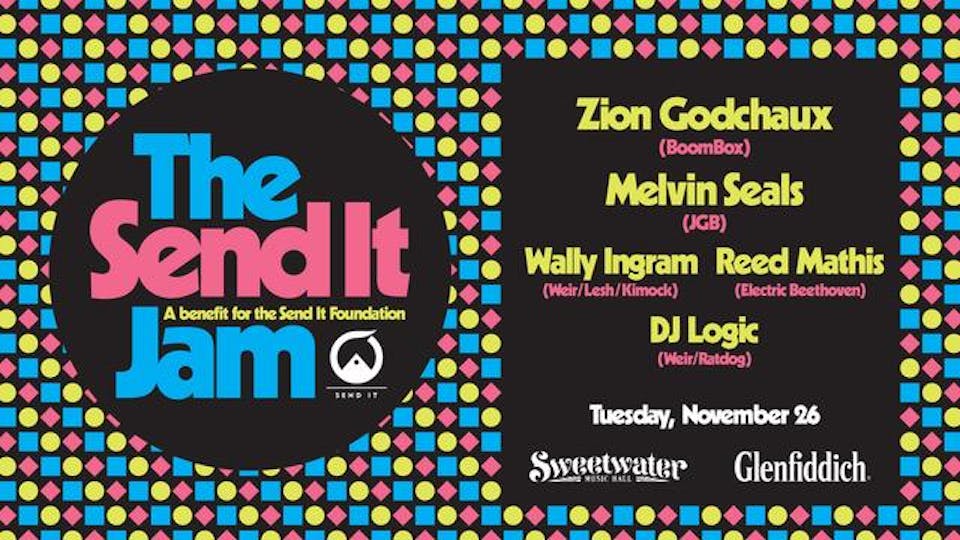 This year’s superstar jam will bring a whole new level of music with Zion Godchaux (Boombox) on lead guitar and vocals, Melvin Seals (JGB) on keys, Wally Ingram (Weir-Lesh-Kimock) on drums, Reed Mathis (Electric Beethoven) on bass, and DJ Logic dropping the super funky beats behind it all.

This is the one and only time these musicians will perform as a supergroup to bring funk, blues, house, rock n’ roll, and jams together, so you’re not going to want to miss this show! The Send It Jam Fundraiser also includes an incredible silent auction featuring items such as a ski house in Telluride, top of the line E Bike, ski and snowboard gear, outdoor adventures, wine, trips and more.

The mission of the Send It Foundation is to inspire positivity, courage, and gratitude in young adult cancer fighters and survivors through the gift of outdoor adventure and community.

Send It creates multi-day adventure programs designed around activities like skiing, surfing, and climbing, bringing strength and courage to the cancer fight. Caught between the worlds of pediatric and adult oncology (ages 20-40), Send It provides a unique space for peer support and connection to this demographic of cancer fighters.

Send It was founded by Mill Valley native, Jamie Schou, when he was diagnosed with a rare cancer at the age of 33. For Jamie, 'someday' became 'today', and with every break in treatment, he skied, biked, paddled, and climbed mountains - keeping him happy, positive, and fighting hard.

In the last year of his life, Jamie founded the Send It Foundation, providing outdoor adventures for young adult cancer fighters, removing them form their cancer experience and creating the space to play, connect, and have fun outdoors.

Send It brings the camaraderie built on the train and the chairlift into the day-to-day, reminding fighters to live for today and to Send It!

BoomBox, the electronic work of songwriter, producer and multi-instrumentalist Zion Rock Godchaux, released two new songs this year, “Right Around Two (feat. Donna Jean)” and “Laid Back and Loaded”, their first new music since the departure of longtime collaborator Russ Randolph. The new tracks are a further exploration of the band’s signature sound; an electronic blend of soulful Rock and Blues based dance music incorporating Backbeat, Psychedelia and Funky House sounds, which Godchaux refers to as “Dirty Disco Blues.”

Melvin Seals is best known for his long friendship and musical partnership with cultural icon and guitarist Jerry Garcia and the smile of his that lights up the room. Melvin spun his B-3 magic with the Jerry Garcia Band for 18 years and in doing so helped pioneer and define what has now become “Jam Band Music”. From blues to funk to rock to bluegrass, The Mix serves up a tasty mix with a little R&B and gospel thrown in to spice things up.

The theorem of turntablist as musician has been long proven in the capable hands of DJ Logic, whom with jazz as his foundation has become a wax innovator by crossing genres and mixing his sound across the map. As one of the world’s most accomplished turntablists, DJ Logic is widely credited for introducing jazz into the hip–hop realms and is considered by most as a highly-respected session musician and an innovative bandleader.

Since his emergence in the early nineties amidst the Bronx hip-hop scene, the New York City based deejay has been amassing a veritable mountain of collaborations, including a full-fledged band with members of Blues Traveler (The John Popper Project ft. DJ Logic), a trio with Steve Molitz & Freekbass (Headtronics), a jazz project with Georgian prodigy Beka Gochiasvili, and as a member of Grammy-winning Arturo O’Farrill & The Afro Latin Jazz Orchestra’s The Offense of the Drum album. He also has a long list of other collaborations with artists ranging from the likes of Bob Weir, John Mayer, Medeski Martin and Wood, Christian McBride, O.A.R., Carly Simon, Marcus Miller, Jack Johnson, Vernon Reid, Warren Haynes, Charlie Hunter, Jack DeJohnette, Ben Harper, Mos Def, The Roots, Bernie Worrell, Bill Laswell, Melvin Gibbs, Fred Wesley, Sean Kuti and many more.

DJ Logic and his role as an electronic-music ambassador keeps him at the top of his game. Whether the scratch artist instructs tablas to flirt with drum ‘n’ bass (such as on his Nina Simone and Billy Holiday remixes found on Sony Legacy’s Remixed and Reimagined volumes), meshes free styling MC’s with Afro-Cuban rhythms (such as on ‘Share Worldwide Funk’ – a remix produced for Jack DeJohnette and Golden Beams Collected, Volume 1), or remixes tracks for rock bands such as Moon Taxi, DJ Logic can always be found paying homage to his predecessors while contributing his vision to the deejay genre.

While the context of his work may vary, DJ Logic’s spinning skills are definitely beyond reproach. He works with a phenomenal roster of invited guests, and he knows how to pick his collaborators as well as his samples. With a growing catalogue of recordings under his belt, DJ Logic’s supreme musicianship and eclectic tastes will allow him to journey wherever an infectious groove may take him.

Wisconsin-born percussionist Wally Ingram is the rock world’s version of Kevin Bacon & there aren’t too many degrees of separation between him and just about every star on stage over the past decade or so. A frightening battle with cancer forced Wally to step away from a magical time on the road with Eric Burdon and the Animals but he’s back, healthy, happy and soaring after a massive outpouring of love and support from family, fans and friends and again playing percussion with longtime friend Sheryl Crow on the world tour in support of her incredible new Detours CD.

If ever there were a drummer in demand enough to be cloned, it would be Wally! He’s been a favorite of everyone from Sheryl and Eric Burdon to Jackson Browne, Bonnie Raitt, David Lindley (with whom he and fans alike enjoyed a long collaboration), James Taylor, Warren Zevon, Crosby, Stills & Nash, Bruce Hornsby, Shawn Colvin, Jennifer Wanres, John Trudell, Tracy Chapman, Crowded House and was one of the members of the popular Grammy-nominated band Timbuk3.

When not on tour with any one (or two!) of those legendary artists, Wally revels in playing with his good friends Dave Schools, Jerry Joseph and Danny Louis in Stockholm Syndrome and also with his Alektrophobia partner Eric McFadden.

After cutting his teeth in Jacob Fred Jazz Odyssey and Tea Leaf Green, bassist extraordinaire Reed Mathis established himself in the Grateful Dead world with membership in Billy & The Kids, The Rhythm Devils, Mickey Hart Band, Steve Kimock Band and the Golden Gate Wingmen. But Mathis' first love was always Ludwig van Beethoven. With his new Electric Beethoven project, Mathis did the unthinkable and fused all of his worlds together, bringing old world masterpieces by Beethoven to today's premiere musical improvisers — an elite class of live performers who have individually made names for themselves in every genre except classical: jazz, funk, folk, blues, and jam rock.